Sandhill Cranes make a variety of calls, from purrs to hisses to bugles, with variations that require the context of what the cranes are doing to understand. For example, purrs are used in calling young, prior to flight or mating, or when the crane is nervous. Unison calls or guard calls are sometimes used to let other cranes know this is the pair’s territory or prior to or during flight flight, as well as in other circumstances. Vocalizations are complex and not fully understood. Enjoy these purrs and unison calls.

Today, March 9, 2016, Kachemak Crane Watch received the first report of Sandhill Cranes in the Homer area.  This is the earliest report we have received.  In the past we have had reports of a few flying high and probably heading north as early as the first week of April.  Reports of local cranes usually start coming in mid-April. 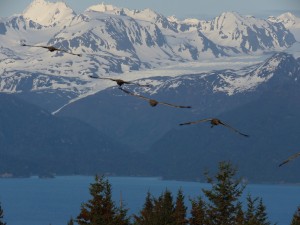 An excited Mary Sanders called Kachemak Crane Watch to report three Sandhill Cranes flying over Beluga Slough and lake area this morning about 8 a.m.   The cranes were flying relatively low, which may mean they are local Homer cranes.  Please let us know if you see other cranes in the area. With changing weather patterns and reports of a bit earlier departure from Central California, the cranes may have made a fast migration.

All the best,
Nina