The Sandhill Crane count down has begun! With their arrival, consider some measures to ensure their safety and nesting success this summer.  Nearly 25 years ago, Kachemak Crane Watch began studying and surveying cranes. Kachemak Crane Watch, along with many Homer residents, have learned much about Homer’s beloved Sandhill Cranes – their nesting habitat, nesting success, migration routes, and wintering locations.

However, as Homer’s population has increased and additional land has been developed, more Sandhill Cranes are nesting in yards within the Homer city limits and non-breeding flocks are hanging out in busy neighborhoods, a potentially dangerous trend.   A major contributing reason for this, in part, is because more people in town are putting out corn for the cranes.

While we love our Sandhill Cranes, we don’t want to see cranes injured or killed by motor vehicles or dogs, or susceptible to other urban hazards such as collisions with power lines.  Nor do we want to see people or pets injured by cranes protecting their chicks.  Therefore, Kachemak Crane Watch is asking people in town not to put out corn for Sandhill Cranes this summer.  Surprisingly, there is plenty of natural food for cranes.

In addition to exposure to predation and other hazards, cranes within city limits are in an urban habitat unlike their natural habitat.  A more balanced diet found in a natural habitat provides protein and other nutrients not available in corn.  Cranes habituated to an urban setting are more exposed to predation risks due to open areas and poor nest sites, have sub-prime habitat to raise their flightless chicks (colts), and urban habitat often lacks essential protein food sources critical to colt development.  Also, colts are very susceptible to toxic chemicals used on urban lawns.  A colt born in June will be flightless until fledging in late August, early September – that colt in an urban habitat is very exposed to predation.

According to Dr. Gary Ivey, with the International Crane Foundation and well-known Sandhill Crane expert, “In these very urban, in-town sites they face increased risk of deaths and injuries from traffic, overhead wires, and domestic dogs.  Living in such an environment fundamentally changes the ‘wildness’ of these birds which may make these human-trusting cranes more susceptible to being shot by hunters and perhaps less wary of natural predators. I would expect that some people will be unhappy as their neighborhood cranes damage gardens and injure pets in defense of their young.”

Over the summer Kachemak Crane Watch will continue to closely monitor cranes within the Homer city limits and impacts of in-town feeding on crane survival, habitat preferences, and interactions with humans.  If you live within the City of Homer, please take the voluntary action of protecting cranes by not feeding them.  Turning the cranes into urban birds that can become nuisances, road hazards, or casualties themselves may force the Homer City Council to pass an ordinance against feeding cranes in the city limits.  Much better to heed the cautionary signs and voluntarily use common sense in not attracting them into these hazardous settings.

Enjoy a walk on the Beluga Slough boardwalk below the Islands and Ocean Visitor Center to observe nesting cranes and watch them raise their colts in a natural habitat.  In late August and early September, enjoy the spectacle of over 100 cranes at evening sunset flying into Beluga Slough to roost and feed.  Remember, feeding cranes is not necessary.  They will find plenty of high protein food to raise their young without extra feeding humans provide.  They will also find better habitat to nest and protect their young from predators and urban hazards.

Cranes are important to Homer – to the people, to our economy.   We love our cranes, so it is all about the cranes and doing what is best for them. We must use common sense and not attract them to where they can get hurt or killed or hurt humans or their pets.  If you live in town, please refrain from feeding the cranes to ensure our Sandhill Cranes and their colts have a safe summer in Homer. 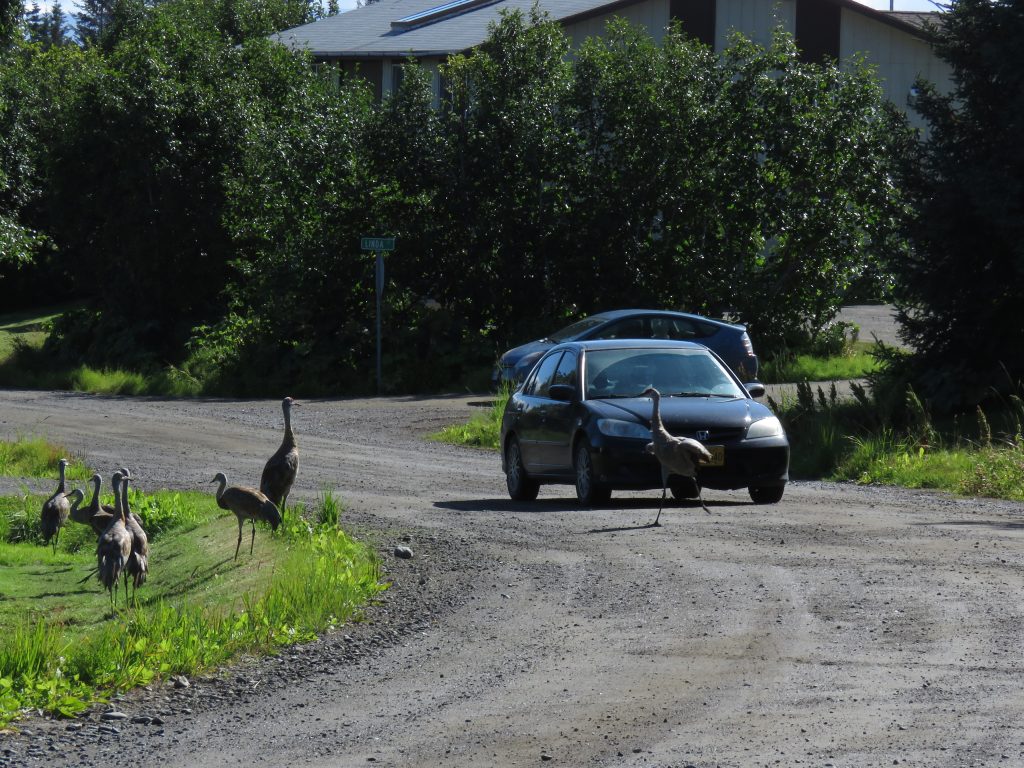 A crane barely gets out of the way of a passing car in a neighborhood in town.